Chivas Regal 12 Year has a warm amber colour with harmonious aromas of herbs, honey and heather. On the palate you detect creaminess with honeyed apple. vanilla and butterscotch with a rich lingering finish. Presented with Chivas Regal highball glass. 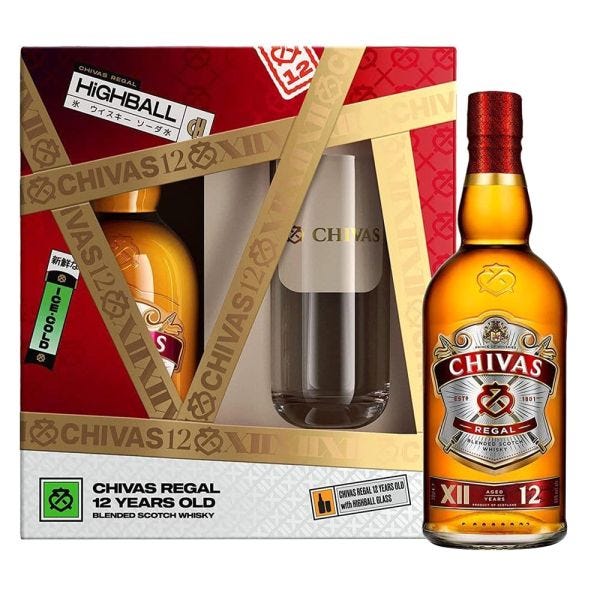 Produced in Strathisla Scotland in the highlands, it was in 1801 when the Chivas brothers open their first shop were they sold gourmet food and drink from around the world to Europe elite. They soon gained a reputation of supplier for good and malt whiskeys.

In 1843, James and John Chivas were awards by Queen Victoria to supply goods to the royal house.

It wasn’t until the 1850’s that they saw an opportunity to create a style of whiskey using combining soft grain Whiskey and robust single malts to create balanced and smooth blend scotch whiskies.

In 1909 the Chivas brother’s whiskey was in high demand, but then prohibition hit and the whiskey went out of production, making their 25 year old blend become a rare collector’s item.

In the 1950’s the 12 year old Chivas Regal blend was introduced to America and won their hearts over night.

In 2001 Chivas Regal was bought by the Pernod Ricard group but they kept master blender Colin Scott to keep the quality of the blend and exceptional taste.