West Indies Dark Navy Rum
Trustpilot
See product reviews
£64.99 £54.16
In stock
Description
Pussers 15 year old is rich in Naval history. It is the only spirits in the world distilled in wood using the old traditional hand-crafted way. At the end of 15 years of ageing in wood, only 7% of the original rum remains in the barrel, the rest evaporating into the air. It takes the equivalent of about 16 bottles of rum to produce this single bottle of 15 year old Pussers! 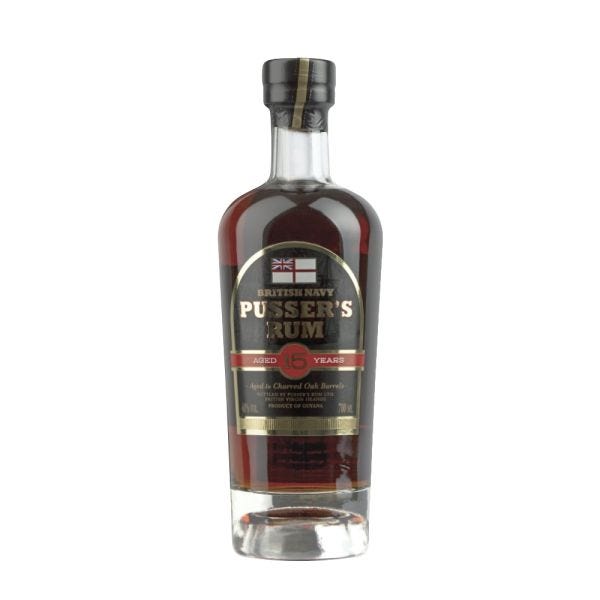 Pussers 15 year old has not only been aged in wood, but has also been distilled in wood, and is the only spirit distilled in wood using the old traditional, inefficient, handcrafted way in opposition to the modern method that employs semi-automatic metal column distillation.

For 330 years from about 1640 until July 31st, 1970, Great Britain's Royal Navy issued a daily rum ration to the sailors on board its ships. The daily ration was known as a tot, and its issue and the ritual that went with it was one of the longest and unbroken traditions in the history of the sea.

The rum used was a special rum called Navy or Admiralty Rum, or Pussers. Pussers being a corruption of the word pirser, after the officer in charge of the ship's supplies. Pussers Navy Rum today is the identical rum that was issued in the Royal Navy right up until the time of the custom's termination on July 31st, 1970. Pussers is known for both its colourful history and its rich flavour. It was never sold or available to the public until 1979. If a connoiseur obtained a tot or two, he valued it for a very special occasion because there was nothing else like it.

At the end of 15 years of aging in wood, only 7% of the original rum remains in the barrel, the rest evaporating nto the air. It takes the equivalent of about 16 bottles of rum to produce this single bottle of 15 year old Pussers!