London Dry Gin
Trustpilot
See product reviews
£2.99 £2.49
Notify me when this product is in stock
Out of stock
Description
Whitley Neill Gin is created by Johnny Neill and made in England but inspired by Africa. Created using 9 botanicals including the fruit of the Baobab tree and Cape gooseberry native to Africa, creating the flavours of Africa in a bottle.

Further product information
Delivery Information
Make It A Gift!
Make your gift special by adding a personalised message to one of our gift tags and select a gift box for extra jazz. For some products, we even offer personalised laser engraving to make your gift extra special.
Click Gift Options:
Add to Wish List
Skip to the end of the images gallery 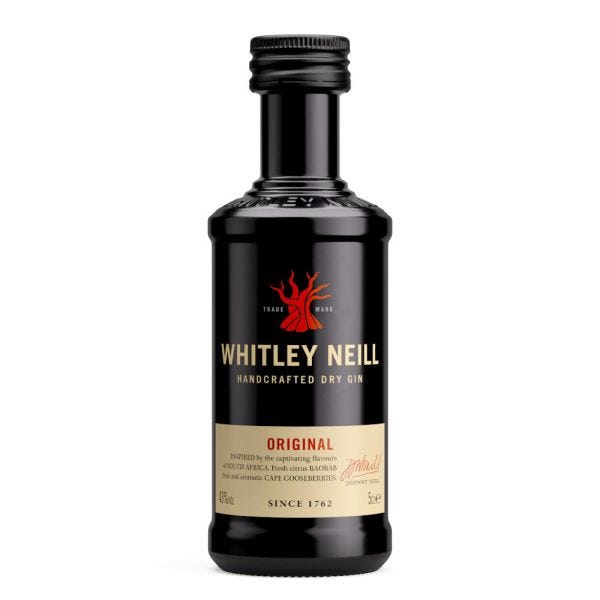 Whitley Neill is a London dry gin made in England but inspired by Africa. Created by Johnny Neill, who has 5 generations of alcohol distilling experience with his family owning the Whitley distillery dating back to 1762. Johnny had always wanted to create his own product range and it wasn’t until he was inspired by his wife to put a new spin on the gin world. Having a strong connection with his wife’s homeland of Africa, Johnny wanted to put the essence of Africa in his gin.

The Baobab tree is known as the tree of life, bearing fresh fruit that when distilled in gin, gives a real taste and experience of Africa. The Baobab fruit brings a balance to the flavours of the other 8 botanicals including the other Botanical that is from Africa, the Cape gooseberry. These are the two botanicals that bring the essence of Africa to the gin and the other 7 are your usual suspects, Juniper berries, Coriander seeds, angelica root, lemon peel, orange peel, cassia bark, Florentine iris (orris root).

Although the botanicals used are blended to bring the spirit of Africa to the gin, the distillation and blending method is English. The blending of the botanicals is done using 100% grain spirit and only the purest water. The method used is Batch distillation which takes place in a small copper pot still and it is only produced in small batches.

Since the release of this African inspired gin, it has won double gold medal at the San Francisco World Spirits Competition in 2007 and a gold medal for ‘Best in Class’ international wine & spirits competition 2007.