Trustpilot
See product reviews
£1.99 £1.66
In stock
Description
Pimm’s No.1 premix is a mixture of Pimm’s No.1 and Lemonade. It was introduced in the 90’s as an easier way for people to have the classic cocktail without fussing about making it. Perfect if you are on the move or just fancy a little Pimm’s. 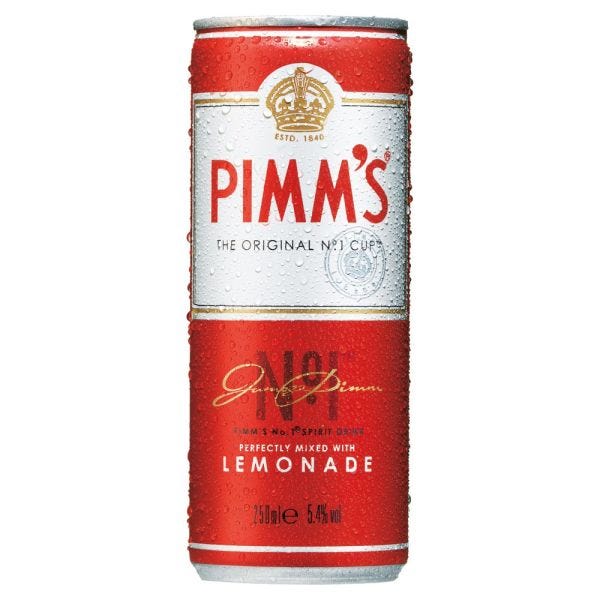 Pimm’s No.1 premix is a mixture of Pimm’s No.1 and Lemonade. It was introduced in the 90’s as an easier way for people to have the classic cocktail without fussing about making it. Perfect if you are on the move or just fancy a little Pimm’s.
In 1800 the dandiest London Gentlemen enjoyed eating oysters and chasing them with a shot of gin knocked back and not savoured due to its bitter taste. This is where James Pimms, shellfish monger and famous oyster bar owner in central London had an over night multi million pound idea. He created a gin based drink assorted with quinine, fruit extracts and a secret mixture of herbs to aid digestion. The London gentlemen soon found themselves swallowing their oysters while drinking the Pimm’s house cup and this was how the great British Pimm’s story begun.

By 1851 James Pimms had already dreamt up another 2 recipes to join with the No.1 cup. He made No.2 from brandy and No.3 from scotch. By 1887 Pimm’s was national, and the name and company got bought by Sir Horatio Davies who was an MP and Lord Mayor of London. He expanded the oyster bar concept to five Pimm’s spirit restaurants.

By 1914 Pimm’s was drunk throughout the British Empire and became increasingly popular during the war. It was seen as good motivator for troupes on the front line and was away for them to relate to home as it is quintessentially British. This was also the time for Pimm’s to become marketing geniuses as they became renowned for their witty ads and clever catch phrases always playing on the British humour.

1969, the era of the swinging sixties, when man was on the moon and Pimm’s was orbiting new venture, as they added two new drinks to the family of Pimm’s, No.5 cup which was rye based and No.6 cup which was Vodka based.

During the 70’s, 80’s and 90’s, Pimm’s saw a drop in sales and it wasn’t until 2003 when they experienced rejuvenation through an advertising campaign featuring a humorous upper class character played by Alexander Armstrong. This also introduced the world to the catchphrase ‘its Pimm’s O’clock’. This advertising campaign boost sales of Pimm’s through the roof and saw the introduction of Pimm’s winter cup which consisted of Pimm’s No.3 cup infused with spices and orange peel. In 2006 the Pimm's brand was bought buy Diageo and their marketing campaign features a more diverse range of characters representing different elements of the Pimm’s cocktail all walking towards a garden party with the theme tune of the 70’s British classic television series ‘The New Avengers’.