Guinness is over 250 year old and sold in almost every country world-wide. The unmistakable deep-dark colour, the crisp hint of roasted barley, the fresh breeze of hops, refreshing bite and bittersweet taste can only describe one drink, Guinness.

Further product information
Delivery Information
Make It A Gift!
Make your gift special by adding a personalised message to one of our gift tags and select a gift box for extra jazz. For some products, we even offer personalised laser engraving to make your gift extra special.
Click Gift Options:
Add to Wish List Add to Compare
Skip to the end of the images gallery
Note: Item may not be shipped in original packaging due to fragility 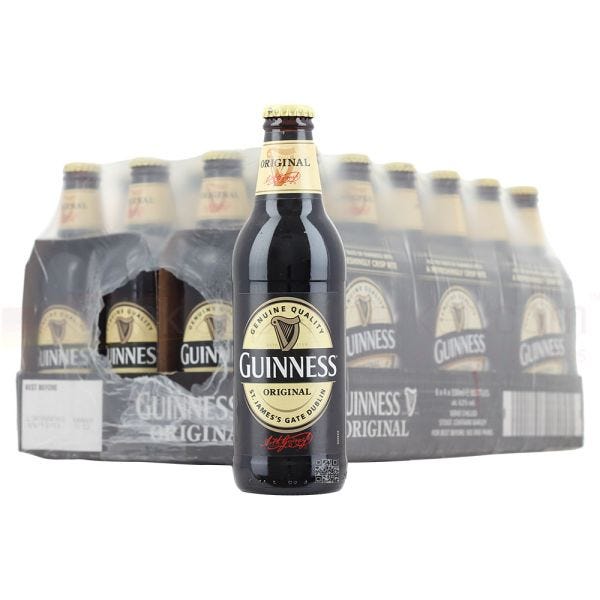 The story of Guinness started in 1752, when Arthur Guinness was left £100 from the Archbishop and three years later he set up a business as a brewer in Leixlip, County Kildare. Arthur Guinness signs a 9,000 year lease on a disused brewery at St. James Gate, Dublin for an initial £100 which included water rights, four acres, consists of copper, a keive, a mill, two malt houses, Stabling and a loft to hold 200 tons of hay. Arthur then begins brewing porter and ale.

1769 saw the first barrels of Guinness being exported to England and in 1811 saw the first barrels exported to Lisbon. 1834 after Guinness had been exported world wide; they change their bottling from Stone to glass. 1862 saw the label change to hold the Harp and Arthur Guinness signature, it later got trademarked and is still found on the bottle today. 1886 saw Guinness become the largest brewery in the world with an annul production of 1.2million barrels and also being the first brewery incorporated on the London stock exchange. This amount grew by 1914 where they produced 3million barrels a year and purchase a steam boat to help with distribution worldwide. In 1929 saw the first advertisement of Guinness in poster form with the slogan, Guinness is good for you. Then came a promotion in 1954, it was called ‘message in a bottle’ and Guinness placed numbers inside 50,000 bottles and dropped them over board in various different parts of the world and if a person found one of the bottles, they then hand to return the bottle to Guinness and they would receive a memento. Bottles were return from across the globe including Liverpool, the Bahamas, Tahiti, the Azores and Mexico.

1960 saw Nigeria gain independence from Britain, and to commemorate this occasion, Guinness and Unilever set up a fifty-fifty arrangement to brew and distribute in Nigeria. This is then followed by breweries in Malaysia, Canada, Indonesia and many more. 1988 the widget was introduced in cans so Guinness could now sell their draught beer in a can. Three years later they were give an award from the queen for best technological advancement. In 1997 saw Guinness Plc and Grand Metropolitan PLC merge to form Diageo PLC. Almost 2 billion pints of Guinness were sold in 2001, and 1 million pints of Guinness sold in Britain alone, 2007 saw 10 million glasses of Guinness sold everyday.